Uncollected: The New Adventures of Hitler

Now that Dare - Grant Morrison’s and Rian Hughes’s dystopian take on Dan Dare, Pilot of the Future - has been republished as part of Yesterday’s Tomorrows: Rian Hughes Collected Comics, maybe it is time for a reissue of Morrison’s other strip for the Revolver/Crisis stable of would-be mature comics from 1990: The New Adventures of Hitler. 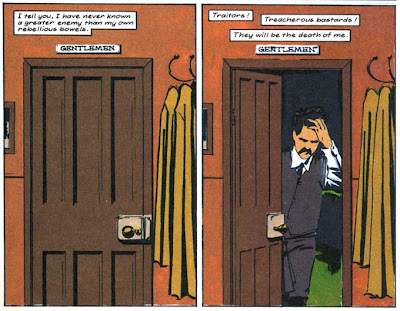 Working with artist Steve Yeowell and a team of colourists – of whom, more later – Morrison tells of a visit paid by Hitler in 1912 to his half-brother, Alois, in Liverpool. The half-brother is real; the visit, fictional, a conceit already used by Beryl Bainbridge in her novel Young Adolf.

Where Bainbridge wrote black comedy, Morrison and his confederates produce something more bizarre. Hitler is in England to find the Holy Grail – which he does, after a fashion, with the aid of John Bull and his incontinent pet bulldog. He believes that a trolleybus is trying to kill him. He hallucinates constantly – not just the image of John Bull, but late 20th century pop singers in his bedroom closet, and men wearing tiny chairs for shoes. 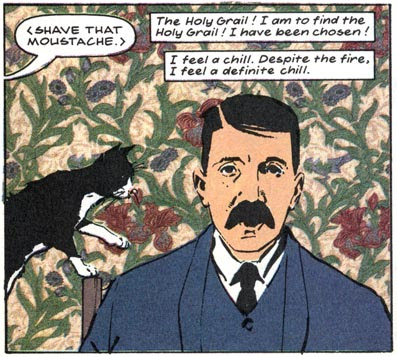 It is not a wholly successful work. It certainly conveys an atmosphere of mental illness, capturing the shabby, mundane reality that permeates the grandiose dreaming. It is consistently amusing (Alois, for example, dreams of world domination … of the market for safety razors). But the parallels drawn between the Nazis and the British Empire are glib claptrap, and the details of Hitler’s delusions and hallucinations often seem arbitrary. Why are Morrissey and John Lennon singing in Hitler’s wardrobe? Are they meant to similar cases of provincial men with artistic ambitions, successes to contrast to his failure? Are they symbols of his ultimate irrelevance? Or just a piece of random wackiness? 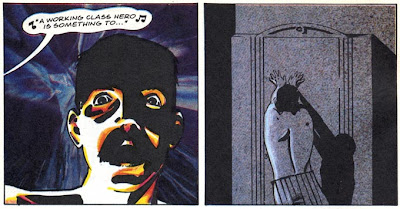 So why am I so keen to see this reprinted? It’s the art, you see. A team of colourists variously credited as “the Spock Whitney Quartet”, “Brian, Dougall and Mr Rusty”, “your Mum”, or, more prosaically “Nick Abadzis, Steve Whitaker and John Buckle” plaster over Steve Yeowell’s drawings with thick, richly textured patterns. This adds to the air of hallucinatory mundanity: we see as through a lava lamp darkly, but the patterns are those of Edwardian endpapers and wallpaper, the lower middle class mechanical offspring of the arts and crafts movement.

Unfortunately, the printing wasn’t up to the job. In places, the patterns leave Yeowell’s drawings illegibly obscured (I've used Photoshop to make the scans here a little clearer). So what I want is not just a reprint, but a high-quality, remastered, art-paper reprint that doesn’t see the inks soak up and blend so much. 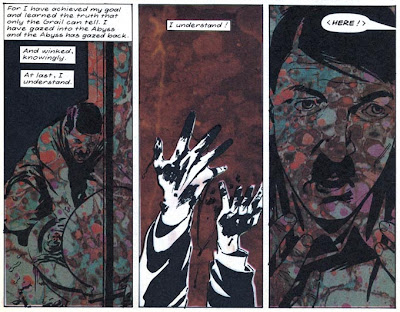 Fat chance of that, I suppose. But a man can dream. Or hallucinate.

A great comic. Thanks for bringing it back to mind.

Cheers for that Steve.

Hmm, I've posted about three out of five on your list, Richard. And I never considered myself a Morrison groupie!