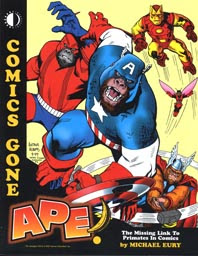 Michael Eury’s Comics Gone Ape, published by TwoMorrows, is an amusing guide to apes and monkeys in American comics. In addition to interviews with noted ape artists like Joe Kubert, the late Bob Oksner and Carmine Infantino, Eury catalogues a vast array of chimps, gorillas, mandrills, baboons, orang-utans and monkeys from seventy years of US comics.

But there is one big – very big – omission.

Now, you might argue that he has no place in a book about apes in American comics, being a British creation. But if Don Uggie Apelino from Judge Dredd merits an entry (by virtue of reprints), so should Mytek the Mighty. 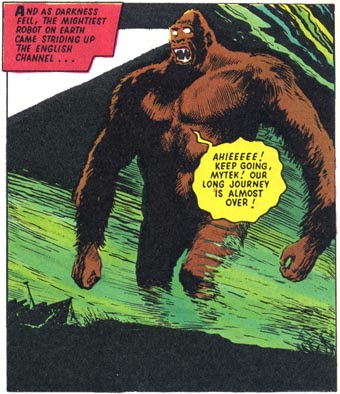 Oh, did I forget to mention? A lot of the time, he’s an underwater giant robot gorilla.

So, why would anyone build a giant robot gorilla? To take up the White Man’s Burden, of course! The International Catalogue of Superheroes explains:

“Professor Boyce was a scientist working on research projects in Africa. After his laboratory was destroyed by the warriors of the local Akari tribe, a gameskeeper friend of his, Dick Mason, told him of how the tribesmen worshipped a clay statue of a giant ape ‘Mytek’ which symbolised the powers of strength and destruction. Inspired by this, the scientist designed a colossal robot in the form of that ape, hoping to employ it to convince the tribe to give up their warlike ways.”

Now, Mytek the Mighty was created in 1964. Britain’s empire in Africa was being dismantled fast. In the years since the Suez debacle of 1956, Ghana, Nigeria, Somalia, Sierra Leone, Tanganyika, Uganda, Kenya, Gambia, Zambia and Malawi had all attained independence. But in the offices of Fleetway Publications, it was still the age of Henry Morton Stanley. 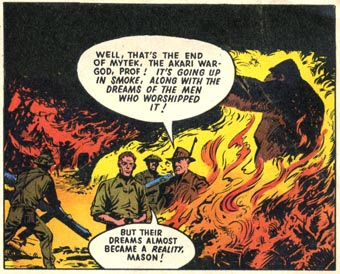 Boyce’s plans backfire when his creation is stolen by his assistant, Gogra, always referred to as “the evil dwarf” (because, if you’re going to be racially insensitive, why not stereotype short people too? It worked for Randy Newman).

Naturally, the Akaris are subdued. Gogra is defeated, time and again. Mytek spontaneously gains a degree of intelligence. Sometimes, he works for, or is controlled by, the good guys. But who cares? The important thing is that he does what a giant robot gorilla should do: he stomps and smashes and smushes, in Eric Bradbury’s rough-hewn, vigorous artwork. 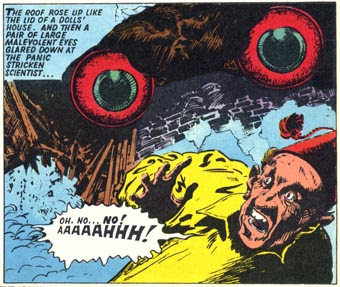 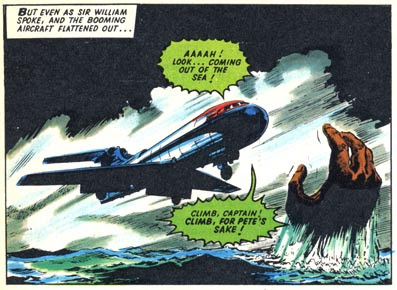 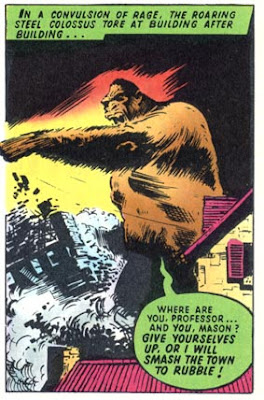 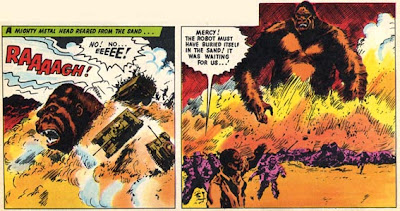 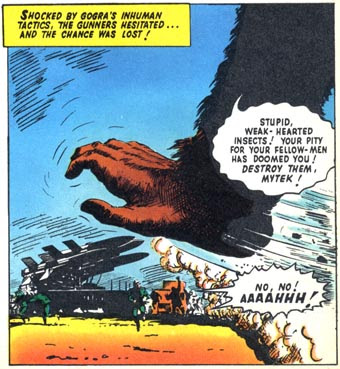 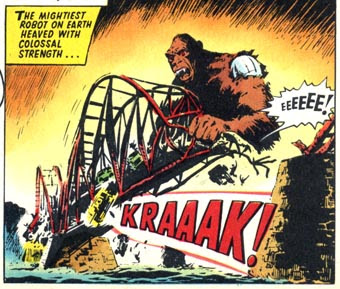 Mytek the Mighty ran in the weekly comic Valiant until 1970. Coloured reprints (from which these scans are taken) appeared in Vulcan in the mid 1970s. And then Mytek disappeared for a while.

In 1992, Fleetway, looking to capitalise on the success of 2000AD, published the 2000AD Action Special, containing revamped versions of a number of old characters from the Fleetway, Odhams and IPC stable, including The Steel Claw, The Spider, Kelly’s Eye and, of course, Mytek the Mighty.

In this version, written by Si Spencer, there is a real giant gorilla called Mytek, who defends the African tribesman against nasty white colonialists, who are oppressing the people with a robot Mytek. 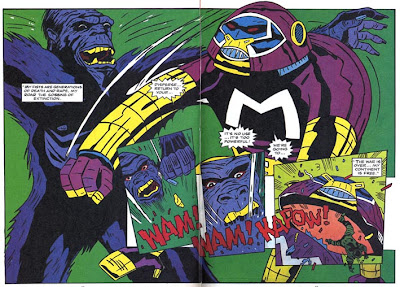 The sympathies have rotated 180 degrees, but the stereotypes of natural, mystical Africans, and technological white civilisation are just as strong and patronising as ever. The strip is also sabotaged by the choice of artist: Shaky Kane, an absurdist humorist who drew in a style inspired by Jack Kirby. The combination of po-faced script and deliberately silly artwork made this effort fall flat on its face. And, crucially, there was no stomping.

So, why do I think that Mytek the Mighty deserved a place in Comics Gone Ape? Well, alongside many old Fleetway characters, he appeared in Albion, Wildstorm’s attempt to relaunch these old British stalwarts into the American market. And although he is not in many panels, Mytek is pretty hard to miss. If nothing else, he isn’t an indistinguishable old man in a prison uniform, like so many of the other characters here. 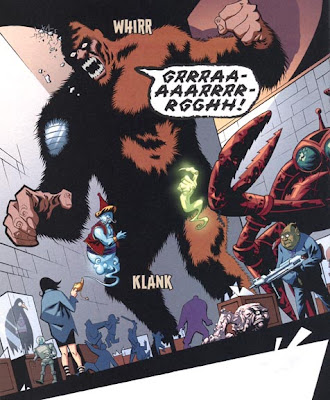 So, please, Mr Eury, if you ever produce a second edition, perhaps to cover the new Kryptonite Monkey and Jackanapes, please spare a thought for Mytek - before he comes looking for you.

(Seriously, the book is well worth reading as it stands. I just wanted a hook for this post.)

Hey, never mind the one big – very big – omission of Mytek the Mighty; the book left out Kid Kong from Monster Fun!

Ah, but I don't think that Kid Kong ever made his way into an American comic book. Poor Americans, deprived of a diet of Robert Nixon artwork ...

There must be a ton of other British ape and monkey characters. Gus the Gorilla from Cor! immediately springs to mind.

It titles itself a guide to Primates in Comics' though, rather than specifically US comics as I recall - so, yes, Gus Gorilla should be there, Monkey Nuts from Whizzer and Chips, and Our Sheriff's a Gorilla from Beezer!

Did you know that Rick Veitch did a version of Mytek (called "Moortek," if I remember right) in one of the tribute-to-Alan-Moore books? It was a giant robot Alan Moore. I swear.

Hi, Isaac - Click the Scans Daily links in the "Update" at the end of the post, and you'll find Rick Veitch's strip.

D'oh! How did I miss that link?