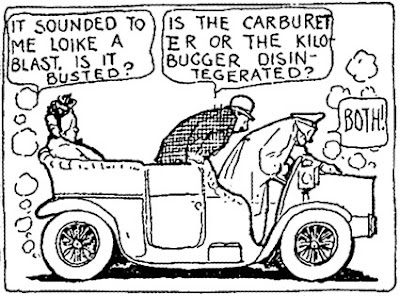 So, a kilo-bugger; that must be, what, equivalent to a thousand ordinary buggers?


Panel
From Winsor McCay Dream of the Rarebit Fiend: The Saturdays (Checker Book Publishing Group, 2007), originally published under the pen-name Silas in the New York Evening Telegram sometime between 1906 and 1911.
Posted by Steve Flanagan at 21:05 5 comments: 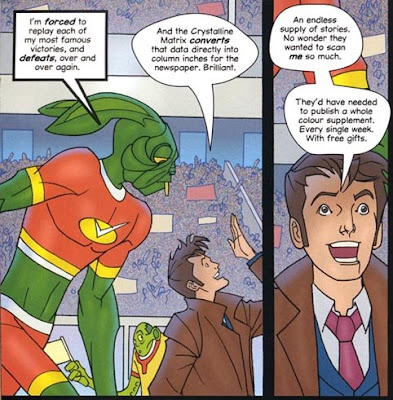 I’m not remotely competent to weigh in to the argument about BookScan sales figures begun by Brian Hibbs in this “Tilting at Windmills” column. But one sentence switched my mental points on to another track.

Brian wrote, “As a periodical comic book, the first issue of Buffy seems to have sold at least 158,437 copies.” That figure is icv2’s estimate of sales in the direct market (comic shops) in North America, as supplied by Diamond Comic Distributors. Now, that caught my eye, because Doctor Who Online reported this on 14 February:

So, very similar numbers, then. Except that the UK is a lot smaller than North America. Using UN estimates, the population of the UK is a little over 60 million, that of the USA about 306 million, with Canada adding another 33 million; taken together, about five and a half times the size. In addition, Doctor Who Adventures was published every two weeks in the period measured (it has since gone up to weekly), whereas Buffy the Vampire Slayer was monthly, with slippage, and later issues sold fewer copies.

So, relatively speaking, the best-selling media-tie-in comic in the UK last year sold at least eleven times better than the best-selling media-tie-in comic in North America. Those sales were mostly to children, through non-specialist shops such as newsagents and supermarkets, the market that North American publishers have largely given up in favour of notional adults like me who go to comics shops.

Of course, this isn’t an entirely fair comparison. Doctor Who is currently quite preposterously popular over here. The Christmas episode had the second largest audience of any television programme broadcast in the UK in 2007, while the series as a whole made the top ten for the year. Buffy, on the other hand, was always a marginal show on a minority network, and there have been no new episodes since 2003. So its comic incarnation can hardly be expected to sell as well. We need something that is about equally popular in both countries.

How about The Simpsons comics? The latest figures I have found for the UK edition are from 2006, and show it selling an average of 134, 631 copies every four weeks*. Does the American edition shift the 740,000 copies a month that it would need to match up?

Not adding to the stockpile of puns on the word “canon” 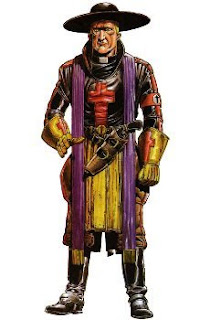 A few weeks ago, Chris Mautner started an attempt to define what might constitute a canon of comics. Timothy Callahan followed up with a longer list. Chris returned to the subject here, and there have been further comments from Heidi MacDonald and John Holbo.

My first reaction on looking at Chris’s and Tim’s lists (somewhat unfairly, as Timothy at least is explicit that he is attempting to set out a canon of American comics) was something along the lines of, “Gad, Sir! How can there be a comics canon that includes nothing by Hergé, Leo Baxendale or Osamu Tezuka?”

Further reflection on my reaction, and the comics I’d be tempted to canonise, leads me to suggest the following definition:

At least, that’s how I’d go about it. I suppose that a canon should really arise from debate leading to some sort of consensus, but I don’t think that F R Leavis paid much attention to anyone else’s opinion, do you?

Stars of page and screen 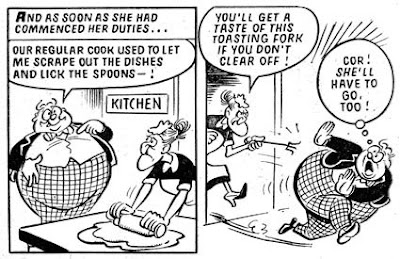 Last month saw the anniversaries of the first appearances of two major characters from twentieth-century pop culture: 100 years of Billy Bunter, and 75 years of Doc Savage.

There is sometimes a sharp intake of breath from offended comics fans when they catch the likes of Marvel describing its core business as managing trademarked characters and other intellectual properties, rather than publishing comics. But, really, appearing in different media is a mark of cultural success, and always has been. Herakles and Theseus cropped up in poems and plays, as statues and on friezes, on vases and on coins. And, sometimes, versions from other media have swamped the original. Mary Shelly lived to see her philosophical, vengeful creature replaced by an incoherent rampaging monster in stage versions of Frankenstein. 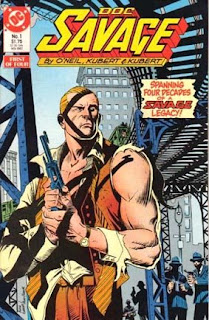 Billy Bunter and Doc Savage first appeared in prose fiction magazines; a species that is now almost extinct (though the death of the magazines did not mean the end of prose fiction, any more that the possible death of periodical comics will mean the end of comics as a form). But I first met Bunter in the comic strip which ran in Valiant from 1963 to 1976, and Doc in George Pal’s 1975 movie version . Although I did later read reprints of some of the original stories from both series, that wasn’t until after I had encountered DC’s 1980s Doc Savage comics.

As well as prose fiction, comics and movies, Doc appeared on the radio; and Bunter on both radio and television. The time for both is probably passed. Doc Savage is altogether too simplistic a hero for modern tastes – Superman without the thrill of flight or the bizarre love triangle. J K Rowling’s Hogwarts revived children’s fantasy, but does not seem to have spawned more stories about mundane boarding schools. Both remain strong images, but are probably fated to remain suitable mostly as knowing references in the likes of Planetary and The Black Dossier. 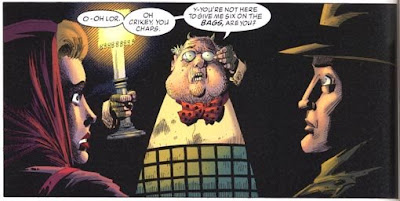 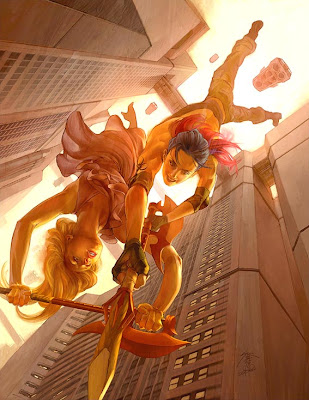 It would seem from Jo Chen’s cover to Buffy the Vampire Slayer Season 8 issue 16 (found via Blog@Newsarama) that Joss Whedon is planning a crossover with his series Fray, which, you will recall, dealt with the adventures of a Slayer in a Blade Runnery far future. This is not too much of a surprise, given that the Big Bad of Season 8 wants to rid the world of magic, while Fray has already told us that it happened. (Click to enlarge, of course.) 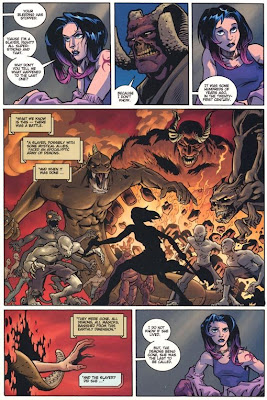 But let’s hope that there’s more to it than tying up dangling continuity threads.

Incidentally, what’s Karl Moline up to these days? 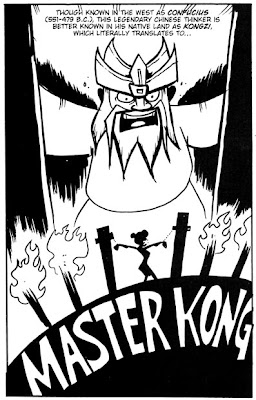 It would seem that my fit of wisdom is passing. Normal foolishness can now be resumed.

It’s Mothering Sunday today here in the UK (now more commonly called “Mother’s Day”, under the influence of the celebration held in the US and elsewhere in May).

My own mother passed away many years ago now, but I’m feeling sentimental, so here are a couple of examples of her favourite comic strip, Fred Basset.

Fred Basset was created by Alex Graham and started running in the Daily Mail in 1963. Graham died in 1991, after drawing about 9,000 strips, but the series has been continued by other hands, including his daughter. It’s notable for a gentle humour, rooted in accurate observation of canine behaviour (at least if the Jack Russell terrier we kept when I was a boy is any indication). The first strip above is far from representative, but I never could resist a morsel of metatextuality.

Pictures
Fred Basset strips by Alex Graham from the Daily Mail, 1977, reprinted in Fred Basset: The Hound that’s Almost Human No.27, Associated Newspapers, no date given
Posted by Steve Flanagan at 17:07 No comments:

As a random purchase this week, I picked up a copy of the current issue of The Dandy (no 3439, 31 January - 15 February 2008, D C Thomson), and was pleasantly surprised to find that it was almost entirely restored to being a traditional comic, with only half-a-dozen pages of non-comics material. However, it’s described on the cover as an “Awesome Mega-Comix Special”, so this may not last. This issue is only on sale for another day or two, so rush out now and inflate the sales figures!

The highlight is a two-page guide to drawing comics by Jamie Smart. 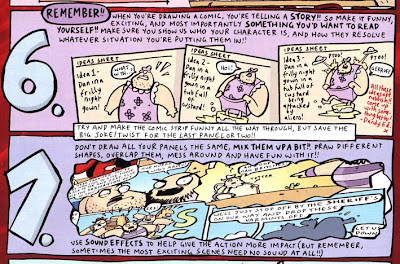 A slightly less rigorous analysis of the form than that offered by Thierry Groensteen, but fun nonetheless.
Posted by Steve Flanagan at 19:48 2 comments:

Gone from a world he never made

Steve Gerber has died, aged only 60. His was one of the most distinctive voices in comics, and he did more than most to expand the range of what letterpress, mass retail comics could cover in the days before the opportunities and disappointments of the direct market. Tom Spurgeon has an obituary.

Crater on Mars, photograph reproduced from The Daily Telegraph web-site, 2008: 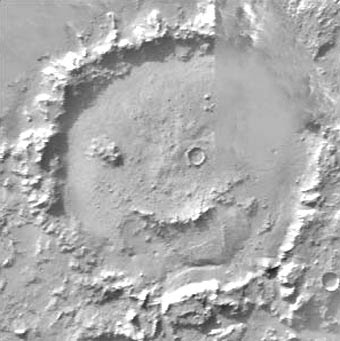 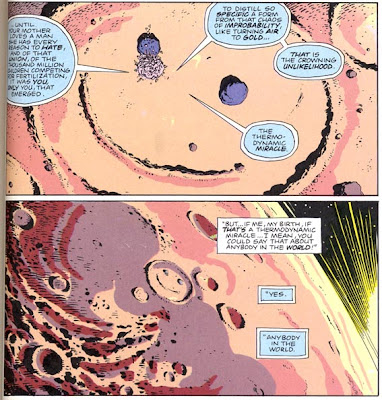 Update, 5 February Oops. It seems that I have been misled by the Telegraph running that story a little late. Over 20 years late, in fact. (See the comments section.)

Next on Gad, Sir! Comics!, the startling news that it looks like there is a man in the Moon. And, hey, don't those stars form a line that's a bit like a plough?
Posted by Steve Flanagan at 20:59 6 comments:

Is he dead, then? Poke 'im with a stick to find out

Hhrmmhm! Oh, sorry, I must have dozed off. Now, where was I? 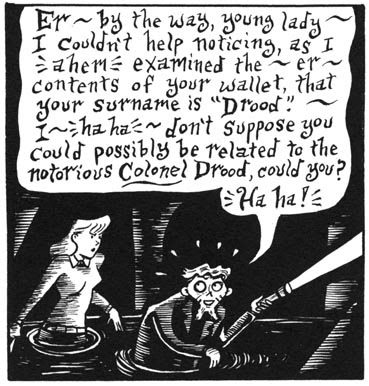 In issue 287 of The Comics Journal, Bill Sherman writes of Judy Drood in his review of The Grave Robber’s Daughter that “her name evokes both Nancy Drew and ancient Celtic rituals”.

It took that issue of The Comics Journal a month to cross the Atlantic, and it has taken me a few weeks to get around to reading it all, so by now Bill Sherman is probably fed up with people reminding him of Charles Dickens’s final, unfinished, novel, The Mystery of Edwin Drood. 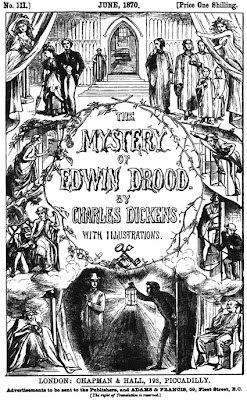 So far as I know, Dickens made up the name “Drood”. Certainly, if you Google it, you’ll find no real people in the first couple of hundred hits. His manuscript notes show that he started with the name “Brood”, and played with variants such as “Brude” and “Drude” before settling on “Drood”.

None of which means that Sherman (or Sala, for that matter) can’t come up with his own associations, of course.

Incidentally, the cover illustration reproduced above is probably more pored-over than any other picture drawn to accompany any of Dickens’s works, in the hope that it might provide clues to how Dickens would have finished the story. It is by Luke Fildes, who shortly thereafter gave up illustration work to concentrate on portrait painting, ending up as a member of the Royal Academy and a Knight to boot. But I have to say that his illustrations are generally very stiff and bland, and hardly deserve to be considered alongside the work of his predecessors on Dickens’s novels, Cruikshank and Phiz. Indeed, next time you find yourself wondering why a first-rate comics writer like, say, Grant Morrison, is so often lumbered with second-rate artists, remember that it happened to the most successful novelist of the nineteenth century, too.
Posted by Steve Flanagan at 20:46 2 comments:

My makeup is dry and it clags on my chin

“We found that clowns are universally disliked by children. Some found them quite frightening and unknowable,” said Dr Penny Curtis from the University of Sheffield, who conducted a study of the best way to decorate children’s wards in hospitals. (BBC News story) 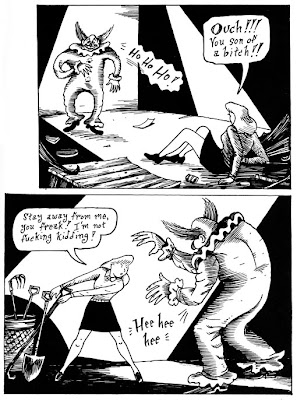 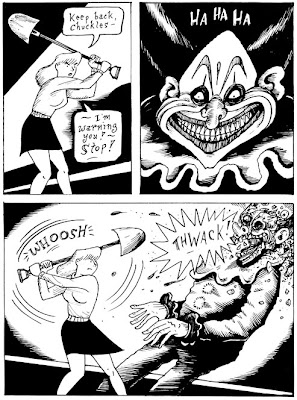 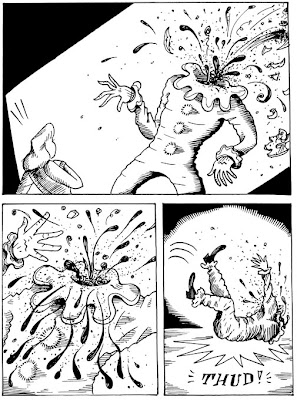 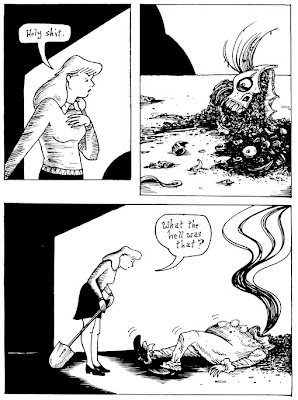 And it’s just about time for Friday Night Fights too. Won’t someone help Bahlactus to take off his crown?