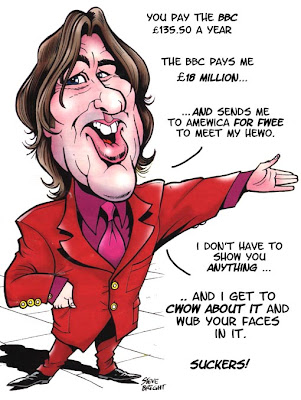 No, that’s not fair.

Without Jonathan Ross, it is inconceivable that the BBC would have made an hour-long documentary about Steve Ditko, and unlikely that it would have had the same access to interviewees as did In Search of Steve Ditko, broadcast last night.

Inevitably, with Ditko unavailable for interview – which could have been more economically established by a phone call from this side of the Atlantic – the documentary was stronger on how his work was received and read than how it was created. Alan Moore was particularly lucid, though that does not entirely excuse indulging him when he recited a song lyric about Mr A. That sort of fluff, and the constant repetition and trails for what was coming up, gave the whole thing the feel of a half-hour documentary unnaturally inflated to an hour.

It was a shame, too, that Ross used his interview with Stan Lee to concentrate on whether Lee considered Ditko to be the co-creator of Spider-Man. The dispute turned out to be based on different definitions of the term “creator” – Lee favouring the initial idea, Ditko arguing that ideas were commonplace, and that it was the execution that mattered. This was not terribly interesting to me. I wanted to know more about what Ditko was trying to achieve with his comics work and how he went about it, rather than dwelling on office politics.

Still, that aspect was not neglected entirely, with Moore, Mark Millar and Cat Yronwode offering some interpretation of Ditko’s ideas, and Ralph Macchio touching on his working methods. The sheer range of interviewees was impressive: I very much hope that the crew taped some material with Jerry Robinson about his own work, as well as his reminiscences of Ditko as a pupil.

And, for fans of Jonathan Ross/Neil Gaiman slash fiction, surely a growing genre since San Diego, there was plenty of fuel for their fantasies. “I’m Robin to your Batman … Etta Candy to your Wonder Woman," indeed.


Picture
Drawing of Jonathan Ross by Steve Bright for “Dennis Meets Jonathan Ross”, BeanoMax issue 1, DC Thomson, March 2007. Views expressed in the captions are none of Steve Bright’s doing, so don’t blame him for them.
Posted by Steve Flanagan at 22:51

Thanks for the humorous pic. As an American, and a Ditko fan as well, is there any way we stateside fans can view the Documentary that you are aware of?

Not that I know of - you could keep an eye on YouTube, I suppose.

Otherwise, there are a couple of clips on the BBC site and an article by Ross on Guardian Unlimited to tide you over until BBC America or PBS or someone shows it.

Hey Steve, just found this link http://www.newsfromme.com/archives/2007_09_21.html#014062
that shows the documentary in it's entirety. Thanks to Mark Evanier for making this available, and thanks to the Captain Comics Message Boards http://www.captaincomics.us/
, where I found the link at!