Over at Yet Another Comics Blog, Dave Carter asks what omnibus editions we’d like to see.

Well, I’m not too keen on omnibuses as such: I’d rather have books that I can hold open without having to undertake a course of weight training first. But there is one comic collection I’d very much like to see but probably never will: Heros the Spartan, written by Tom Tully and drawn by the incomparable Frank Bellamy, the supernaturally-tinged story of a Roman soldier, born in Sparta, posted to a monster-haunted ancient Britain.

One problem with reprinting Heros is its format: it appeared stretched across the centrespread of the tabloid sized Eagle comic, treating the whole area as a single page. The landscape pages of Frank Miller’s 300 - a story and format inspired by Heros - are not much more than a quarter of that size. 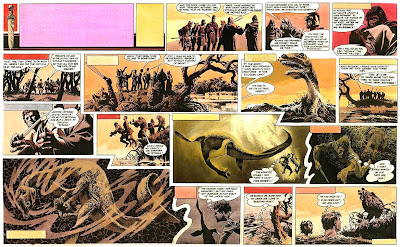 Even so, Bellamy’s work on the Thunderbirds comic strip from TV21, which used the same format, has been reprinted several times, at least in part. But Thunderbirds has a life of its own, as demonstrated by the existence of an ongoing comic even now. Heros never stuck in the popular consciousness like his stablemate Dan Dare. I guess that if anyone was going to reprint the strip, it would have been to cash in on 300, with Frank Miller cover quotes.

Frank Bellamy – The Checklist says that one Heros story, “The Island of Darkness”, was reprinted last year by Douglas Shaw, but my Google-fu has failed to turn up any more information about either Shaw or the reprint. I guess I’ll have to ask.

It would still be nice to see the whole thing. If my quick calculations are right, all of Heros the Spartan would fit on to only about 100 big, wide pages. Even at 360mm by 580mm, that needn’t be a wrist breaker.

Page of Heros the Spartan downloaded from an art dealer a while ago – I’m afraid that I didn’t note the name or URL
Posted by Steve Flanagan at 19:52

I agree - Heros is an unknown gem and I've seen little from the strip beyond pages one excited veteran artist showed me he'd bought at auction. This would definitely have to be a coffee table, high end book to facilitate reproduction perhaps, although I do know one publisher has asked me where he would source the rights, but I don't know how far he got with the Dan Dare Corporation, who own the Eagle.

If you haven't already got it, John, that Eagle Annual does have an 8-page Bellamy-drawn episode - though smaller and less well printed than the weekly. It seems to be easy enough to get hold of. There were about 4 copies on eBay when I bought mine.

I like the idea of a reprint but why stop with Bellamy ? I began taking in the Eagle just as Frank Bellamy was ending his run and the artwork on Heros was taken over by the great Spanish cartoonist Luis Bermejo. Frank Humphries weatherbeaten western Blackbow should also be reprinted in full it was a wondwerful comic.

sweet blog I love the artwork you posted, reprint would be realy cool:) check out my ancient worldz blog if you get a chance, I love all feedback :)

I thought I'd already posted a reply to this entry, but I can't see it.
Anyway nip over to my Frank Bellamy Checklist website (and click on the NOTE) to see the news that 2 volumes of Heros has been reprinted without much publicity.
And thanks for your blog!

I'm going to check out that checklist.
I LOVE Frank Bellamy's art.
I have Ring of Roses issue 1 artwork, by John Watkiss, and he is a big FB fan.
And Frank Brangwyn too.
Maybe anyone with the initials FB is just a born genius.