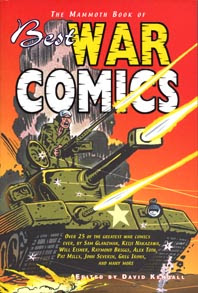 The Mammoth Book of Best War Comics, edited by David Kendall, approximately 500 pages of strip, Constable & Robinson, 2007, £12.99
Features: “I Saw It!” by Keiji Nakazawa, translated by Project Gen
“The Tin-Pot Foreign General and the Old Iron Woman” by Raymond Briggs
Charley’s War, first instalment, by Pat Mills (writer) and Joe Colquhoun (artist)
“Snow” by Askold Akishin
“Desert” by Carol Swain”
“Lone Hawk” by Archie Goodwin (writer) and Alex Toth (artist)
“The Landings in Sicily” (uncredited)
“Landscape!” by Archie Goodwin (writer) and Joe Orlando (artist)
“The 5.56 Blues” by Don Lomax
“Souvenirs!” by Archie Goodwin (writer) and John Severin (artist)
“A Bullet for Me” by Darko Macan (writer) and Edvin Biukovic (artist)
“Combat Zone” by Darko Macan (writer) and Edvin Biukovic (artist)
“The Legion of Charlies” by Tom Veitch (writer) and Greg Irons (artist)
“You Only Lose Once”, art by Sam Glanzman
“Breakout at St Lô”, art by Sam Glanzman
“Pearl Harbor”, art by Sam Glanzman
“Your Luck Just Ran Out …” by Alexey Malakhov
“Last Day in Vietnam” by Will Eisner
“The Casualty” by Will Eisner
“The Road to Glory” (uncredited)
“Sand” by Marc Chadbourn (writer) and Nathan Massengill (artist)
“Long Distance Runner” by Danijel Zezelji
“A Bowl of Rice” by Ilya
“Slaughterhouse Safari” by Fabian Goranson
“School Essays of Berlin Kids About the Year 1945”, adapted into comics by Ulli Lust, translated by Kai Pfeiffer
“Casting Stones” by Eric Drooker 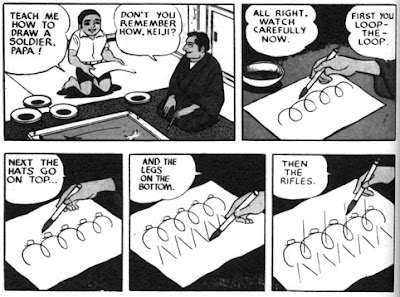 I was tempted just to leave this review at the contents listing. I mean, 500 pages of comics including complete works by Will Eisner, Alex Toth, Archie Goodwin, John Severin, Raymond Briggs (author of When the Wind Blows), Eric Drooker (of Flood) and Keiji Nakazawa (his first-hand account of the Hiroshima bombing, which he later expanded into Barefoot Gen)? It’s not a hard choice, is it? 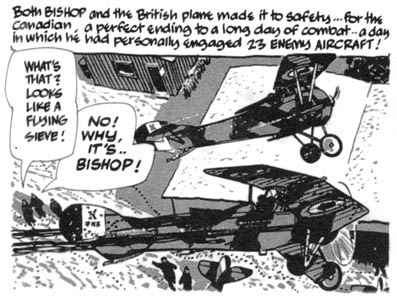 There is a wide range of material here, from American, British, Japanese, German, Russian and Croatian writers and artists. Many of the stories deal with the Second World War or Vietnam, but others cover conflicts from the Great War to modern Burma. Styles range from Goranson’s autobiographical art-comics approach to an encounter with FARC guerillas in Columbia to Briggs’ caricatured satirical fable of the Falklands War and Veitch and Irons’ bizarre underground tale of Vietnam veterans possessed by the spirit of Charles Manson, by way of the high-calibre mainstream US comics story-telling of Archie Goodwin and his cohorts from Warren magazines. 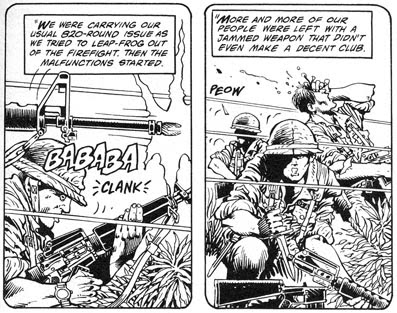 The main mode of war comics omitted here is what you might call the “war is fun” school, exemplified by Sgt Fury and his Howling Commandos in the US and Captain Hurricane in Britain. Several publishers are not represented, presumably because they were unwilling to have their stories reprinted here. They include DC Thomson, so there’s nothing here from Commando or Warlord, and also DC Comics and EC Comics, so there’s no Kubert, Kanigher or Kurtzman (although the cover of the book has obviously been borrowed from an issue of Frontline Combat). Some Tardi or Hugo Pratt would have been welcome, too, but you can’t have everything.

Reproduction is generally good, but some of the material originally intended for US magazines or British half-tabloids suffers from reduction to 15.6 by 23.4 cm pages. The second of the long (and rather dreary) representatives of the British “picture library” format appears to have been scanned from a rather muddy published copy, as have the three Sam Glanzman stories which are the other weak point of the book (pedestrian stuff, with no narrative drive or fluidity of panel-to-panel progression), but which hog all of the available colour pages. I would rather that Briggs’ “The Tin-Pot Foreign General and the Old Iron Woman” had been reproduced in the colours in which its author painted it.

But all this is quibbling. This is a varied, thoughtful collection. As a one-volume survey of an entire genre of comics, it is hard to imagine it being done better. It is also heartening that Robinson has taken a second step into market for big comics anthologies, after its Mammoth Book of Best New Manga last year. Perhaps we can hope for a Mammoth Book of Best Crime Comics or Horror Comics or Romance Comics or …
Posted by Steve Flanagan at 21:47