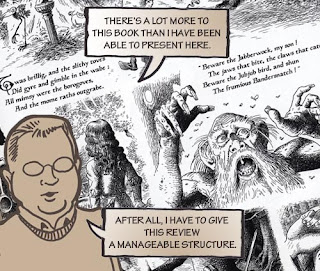 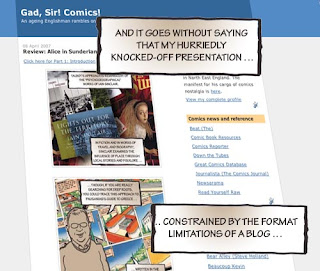 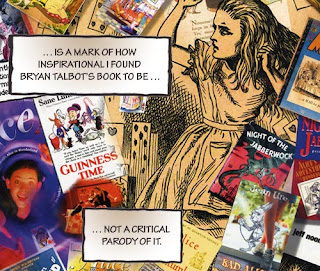 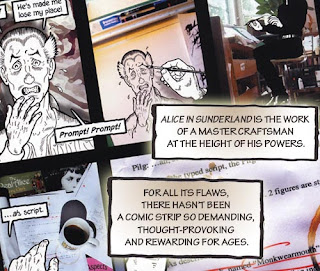 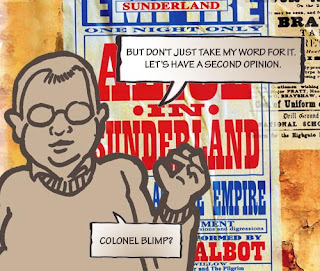 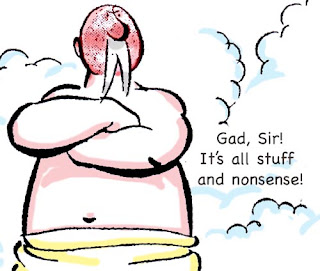 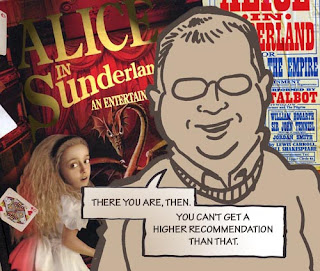 This is an absolutely delightful review. Thank you for it!

I just hope that the book itself (which I have on order) will be as good, in which case I'll enjoy it a lot.

Masterful review. Still only part of the way through Sunderland, but enjoyed reading your examination thereof. Was actually sitting in a pub and talking to a friend about its comparisons to Sinclair's work this evening too.

Many thanks for an excellent review and for all your kind words about the book. Not only that but clever, too. I think that it’s the only time that I’ve seen a review of a comic done not only as a strip, but also in a similar style to the comic being reviewed.

It seems almost churlish but I do feel that I have to take issue with one aspect though – that you describe the book as having a “lack of structure”. This is, in fact, the very opposite of the case. If there is anything at all clever about the book, it’s the structure, one I’m extremely proud of. I worked on the structure for six weeks solid before I wrote a single word of the script. That’s 7 days a week and dozens of drafts, refined until it was, to my mind, perfect. In a way, I’m delighted that you couldn’t see it – the structure is not meant to be obvious to the readers – but it’s what holds everything together. The seemingly random and dream-like segues from one part to the next actually hang from a rock-solid framework: the apparent stream-of-consciousness, dream-logic text is pure artifice. The information is presented so that it builds upon itself, so that each piece is presented in such a way that allows the reader to progress smoothly through the book, introducing information precisely where and when it’s needed. That the threads, such as the story of Carroll and Liddell, the history of the city, the history of comics etc are presented in order in episodic form and, for example, the Pilgrim’s walk ends exactly before the “Intermission” and the boat trip in the second half ends exactly when it should are no accidents. I think that if you made a list of all the scenes on a large sheet of paper, you’ll be able to see clearly how they are all interrelated and how sections are all meticulously foreshadowed.

The polemic on asylum seekers is an example of this – it is foreshadowed throughout the book and is to some extent the heart and soul and raison d’etre of the piece. I’ve been told by some readers that it’s their favourite section. The Henry V sequence (which I also link to Carroll at one point) and Hartlepool Monkey story, another two sections that you feel are misplaced, show your misunderstanding of the book’s intent. Based very firmly in an Edwardian palace of varieties, the book is intended to be a “variety performance” – something quite clearly telegraphed by the music hall poster frontispiece. That they appear exactly where they do is, again, all down to the structure – one that is so tight that I couldn’t fit in other stuff that I would have liked to have covered simply because it couldn’t be amalgamated without disrupting the flow. The use of the present tense, by the way, must be a matter of taste as most readers seem to like the impression of history being made immediate.

Oh, bugger. I seem to have ranted on at great length about one aspect of your, on the whole, very flattering and clever review. Please forgive me. I’ll not open a debate on why cultural change was brought about by waves of immigration (you have only to look at British place names to see the effect that new arrivals had on the country) and I never say that Robin Hood was a Saxon, but I’ll stop here.

Thanks again, and I’m glad you enjoyed the book.

Hmm – I see that you’re a Geordie, which makes your review of a book on Sunderland VERY suspect! Only joking.

Thank you for the kind words and for taking the trouble to respond. Clearly, I need to read the book again with your comments in mind (not exactly a hardship).

Cheers, Steve. I actually regret posting the comment now as it makes me seem as if I didn't love the way you reviewed the book and appreciate your extremely flattering comments. It was a knee-jerk reaction to a criticism of the one aspect of the book that I'm entirely satisfied with.

It's always surprising when personal taste comes into any equation. I've read a couple of reviews that state the book is weak in certain areas that other people quote as their favourite bits. On ne sais jamais.

Keep up the good work.

I would just like to add a brief thought to the thread.

I stumbled across your review on Boing Boing, and immediately ordered "Alice".

Trust me when I say that this book has been a most incredible sanctuary for me during a period of extraordinary personal stress. For that, I thank you, Steve, for your review; and I thank you, Bryan, for your genius.

Steve; I wonder if it would be possible to entice you to review the Heart of Empire CD-Rom by Bryan and myself...

You see after many attempts to explain exactly what is is we've given up and put the whole of the first chapter online; it's at

The CD-Rom is the "Director's cut" of Heart of Empire by Bryan Talbot; it contains every page in it's original penciled format - then the interim inked format and then the final coloured format. And then every page in VERY high rez.. - and then 60,000 words of annotations from Bryan on where he gets his ideas, with rants, digressions anecdotes and influences... - and then every front and back cover, and biographies and interviews.... and also the whole of the Adventures of Luther Arkwright in the best ever digitally remastered format too.... it's a massive and insane labour of love..

- and precisely because it is so big and hard to describe we thought we would put the first chapter online for free so we could say "y'know what? - here's the first part; go check it out and then you'll know what we are talkin' about!"