The Bellamy of the Daleks

The Daleks are back again on Doctor Who on Saturday. Their appearances are now so frequent that they are in danger of overexposure.

They hadn’t been on screen for the best part of six years when “Day of the Daleks” aired in 1972. The Radio Times marked the event by putting this Frank Bellamy drawing on the front cover. It is, perhaps, my favourite piece of Doctor Who artwork ever. 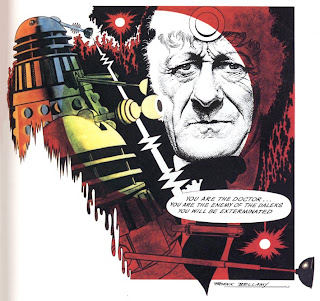 (In case you're wondering, the band around the Doctor’s head is part of the mind probe the Daleks used to establish that this Doctor was the same person as the others they had met.)

I wasn’t the only one to be impressed. A year later, Target Books acquired the rights to reprint three Doctor Who novelisations written in the 1960s, and they chose to copy Bellamy’s design for their covers. They couldn’t get Bellamy himself to do the work, so they hired the younger Greek artist, Christos Achilleos, to impersonate him. The reprints were a hit, and Achilleos went on to draw a couple of dozen more covers in the same style, as Target started commissioning new novelisations. But here is that first cover. 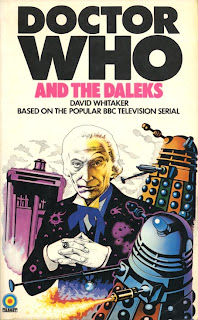 Frank Bellamy wasn’t Achilleos’s only inspiration. He must have lacked photo-reference, because those two Daleks are swiped from Ron Turner’s 1966 artwork for The Daleks comic strip in TV Century 21. 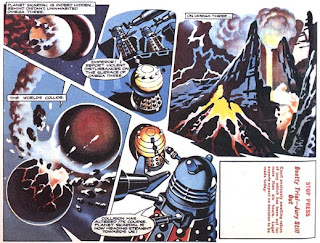 The Radio Times commissioned a good deal of Doctor Who art from Frank Bellamy in the 1970s. The listing for each Saturday’s episode was accompanied by a small, postage-stamp sized, illustration, like these from the six-part “Planet of the Daleks”. 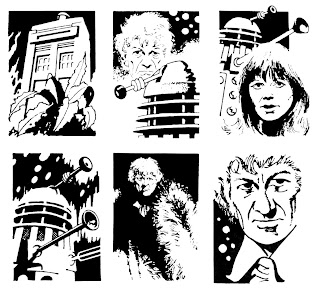 The most striking of Radio Times’s commissions from Bellamy was a four-page comic strip adaptation of the opening of part 1 of “Colony in Space”. The page layouts were startling even by Bellamy’s standards. 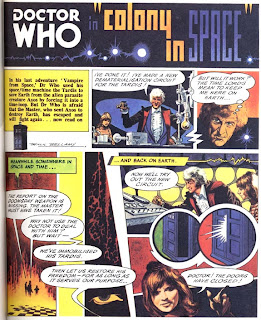 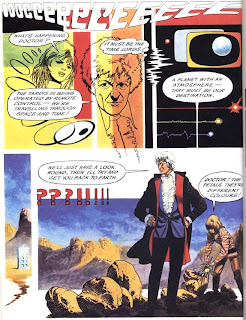 After Jon Pertwee left the part, Radio Times cooled on Doctor Who, and the show was only given the cover once in the last fifteen years of its original run. So this terrific illustration for “Terror of the Zygons” appeared on an inside page. 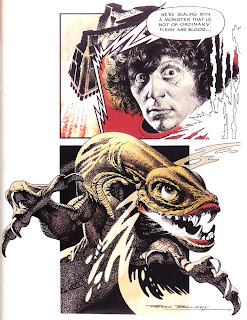 By the time of the 1996 TV movie with Paul McGann, attitudes had changed again. Not only did it make the cover, but Radio Times commissioned a half-page comic strip, written by Gary Russell and drawn by Lee Sullivan, which ran for the best part of a year. The strips can be found at the Doctor Who Cuttings Archive.

Today, Doctor Who can count on being on the RT cover several times each series. But it’s all photographs nowadays, inside and out.

Doctor Who in an Exciting Adventure with the Daleks by David Whitaker, 1964, cover illustration by Christos Achilleos, Target Books edition, 1973

Beautiful stuff. Happy to see you finally got to post about Doctor Who. I have too little of his art reprinted here and there in my (extremely small) collection of Whovian stuff.

As part of my Doctor Who Week celebrations, a link has been added on my page to this very post.

Hear that, world? You post about Doctor Who this week and I give you free publicity!!!

If you click the "Doctor Who" label at the end of the post you'll find several others about Doctor Who and comics. I have another one planned for next Friday.

Is that a kazoo?

I'm afraid it is.

20 years of improv will do that to a man.