As usual, I was way too late to contribute anything to Tom Spurgeon’s call to "Name Five Near-Versions of a Character You Like, At Least a Little Bit" for his “Five for Friday” feature at The Comics Reporter. His original list (Wonder Tot, Bizarro, Calvin’s Clones, Gaard and Captain Marvel’s Squadron of Justice – Fat Marvel, Tall Marvel and Hill(billy) Marvel) is here, and responses of nimbler folk in the Blogosphere are here.

Some comics creators love this sort of stuff. Consider Grant Morrison, who gave us Acid Archie, the loved-up version of Lion comic’s stalwart Robot Archie, a mundane set of New Gods (subsequently ignored by DC Comics like the rest of his work on Seven Soldiers except, curiously, his new version of Klarion the witch-boy), and these guys, who featured in just a few panels of Animal Man, but who have always stuck in my mind.

Who needs a Justice League when you can have a Love Syndicate?

Then there’s Alan Moore, with his multiple versions of Tom Strong and Supreme, and a whole multi-verse full of analogues of Captain Britain. One of those even got his own spin-off strip in Mad Dog, a special issue of the 1980s ‘zine Dogma. Meet the hero of Oceania, Captain Airstrip One, in a story largely written in Newspeak. 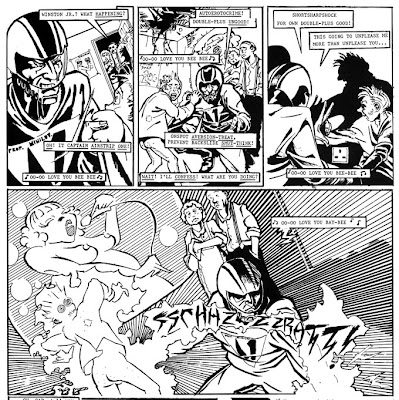 Paul Grist is another serial offender. It seems that every other character in Jack Staff has an analogue in old British comics or TV. Or, in this case, a comics writer with a fondness for creating multiple near-versions of his characters. 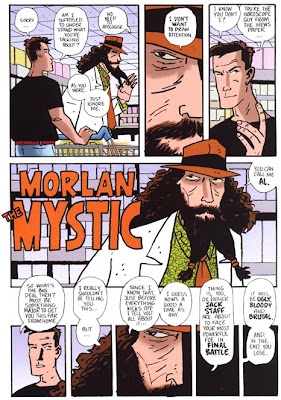 Did it just get recursive in here?

(Yes, I know that’s only three. I missed the train, so why worry about the terms of the ticket?)