The Other Cyd Child

One of the tidbits of information in the extras included in Titan’s series of Modesty Blaise reprints is that original artist Jim Holdaway had a set of reference photos taken to help him with the fight scenes, modelled by European women’s judo champion Cyd Child.

Child also worked as a stunt artist, and often doubled for Diana Rigg in The Avengers. So, stretching a point, you could say that she played both Modesty Blaise and Emma Peel, which is quite an achievement.

The history of The Avengers in comics was covered in an article by Ian Wheeler, John Freeman and Dez Skinn in Comic International issue 201, and is the subject of a fine web-site, The Avengers Illustrated.

Among my pitifully small collection of issues of TV Comic is issue 720, from October 1965, which marked the start of a seven-year run of The Avengers, off and on. 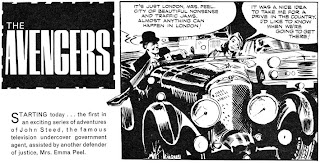 (Is it just me, or should those dialogue balloons be read manga-style?)

Some of the TV Comic strips were reprinted for the American market by Gold Key. Although the indicia name the single issue they produced as The Avengers, the cover carries the title John Steed, Emma Peel, presumably to avoid confusion and trademark conflicts with Marvel’s super-hero team. The Avengers Illustrated shows the photographic covers, but here is how the newly-coloured interior art appears. 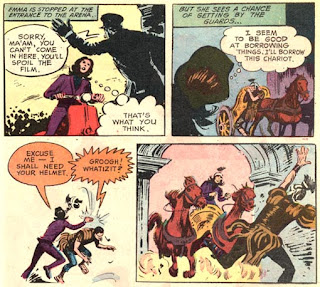 By far the best comic strip version of The Avengers ever put into print was the mini-series Steed and Mrs Peel (which also features Tara King), published by Eclipse Comics and Acme Press between 1990 and 1992, and written and drawn by Grant Morrison and Ian Gibson, perhaps the most perfect combination of creators and subject that I can think of. Confusingly, the back-up strip, about Mrs Peel’s reunion with her husband, was also drawn by Gibson, though it was written by Anne Caulfield. The back-up is quite amusing, but not a patch on the main feature, “The Golden Game”.

Again, The Avengers Illustrated only shows the covers, so here is a sample of the interior. 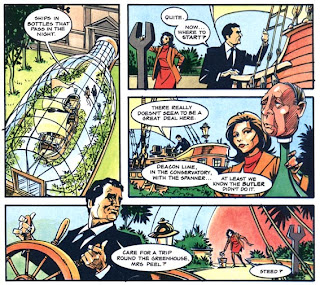 “The Golden Game” is a clever and witty story, and deserves a trade paperback if anyone can get the reprinting rights.

Here's a second opinion from yours truly's faux-blog.

"Faux-blog"? Isn't that what they call the suburbs of Paris?

I suspect that our differing opinions result from different starting points. I read Steed and Mrs Peel as a piece of Avengers ancillary fiction in the first place and as a Grant Morrison story second. So I was impressed by how much more entertaining it was, and how much better it caught the tone of the TV series, than, say, John Peel's novel Too Many Targets, rather than being disappointed that it wasn't as wild and inventive as Doom Patrol or the New Adventures of Hitler.

Agreed. The review also came after rereading it many years later. When I originally read it, I didn't know Morrison from Adam, and certainly I stuck with it because I liked the Avengers (what little I'd seen of it).

I was just going through some comics my grandfather left me and I found that single issue comic by gold key. Interesting to read your history about it.