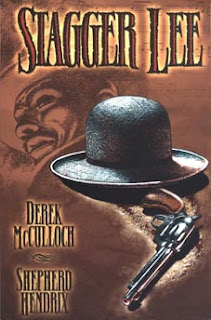 Stagger Lee was published last year, so this is a little late for a review. But I wasn’t blogging then, and this is a book worthy of notice.

You have probably heard one of the many songs. As Lloyd Price roared in his 1959 hit, “Stagger Lee shot Billy.” It was, as most commonly described, an argument over a hat. McCulloch and Hendrix examine the roots of the story, discuss how it has developed, and weave their own historical fiction around Stag’s trial for murder. 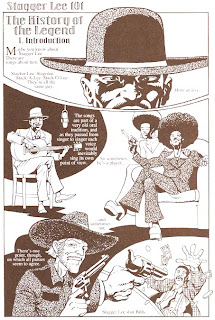 The fictional narrative makes up the largest part of the book. It identifies Stagger Lee as one Lee Shelton and his victim as Billy Lyons, killed in 1895. It begins with the shooting, and then examines Lee’s arrest and trial chiefly through the eyes of a lawyer’s clerk who works for his defence, and of a cathouse pianist who begins to compose one of the first Stagger Lee songs. Both men are competing for the affections of the same woman, who is trying to escape from the underworld that Lee represents.

McCulloch places this story squarely in the middle of the party and racial politics of St Louis in the 1890s. Lee and Billy were both black, and such a murder would normally have been neglected by the police. But Billy’s family had powerful Republican allies, while Lee was a Democrat activist. Political machinations ensured that Lee was tried, but also that he got a first class defence.

Interspersed with this main narrative are a number of other fictional tales set before the shooting, which flesh out the backstory and give more insights into the black underworld of the time and its relation to white authority. 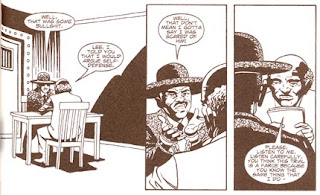 Hendrix draws these narrative sections of the book in a solid, sober, clear-outlined style that lends them the nearest comics can manage to documentary neutrality. This gives the account an added degree of authority. I have written elsewhere about my qualms over presenting historical reconstruction this way. In the case of Stagger Lee, however, McCulloch concludes the book with a text appendix which explains what he has changed from the historical record, what he has made up, and even what he got wrong but still incorporated into the story.

The appendix effectively turns the narrative sections of the book into a special, extended, version of the multi-faceted variations of the Stagger Lee story that are examined in the remaining comic-strip chapters of the book (and it might perhaps have been better if McCulloch and Hendrix had examined their own story in the same way, rather than switching to prose). These are essays on how the tale of Stagger Lee developed in folklore and popular song, paying attention, for example, to the different motivations given to Stag and Billy, including the introduction of pity (or otherwise) for Billy’s family; to the fates Stag meets or escapes at the hands of the hangman or the devil; and to the ways in which the story changed when sung by or to black or white performers and audiences.

In these discursive chapters, which are intercut with the narrative, McCulloch’s authorial voice, hidden elsewhere, is upfront and captioned. Hendrix’s artwork here is more varied, with looser and more playful styles of drawing and composition. A nice touch to tie it all together is that, throughout their many transformations, Lee and Billy are each shown wearing clothes with the same distinctive patterns, so that they can be easily recognised. 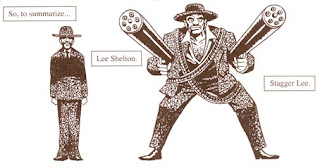 Taken as a whole, the book is engrossing, well-balanced and satisfying. The only slight drawback of this comic book is that there is no way of hearing the songs as they are discussed. But McCulloch thoughtfully appends a play list, so you can always go and hit iTunes.

One last thought. In his essay on Stagger Lee in his book Mystery Train, which drew upon some of the same academic sources as McCulloch and Hendrix, the American pop culture pundit Greil Marcus proposed a completely different (if less convincing) candidate for the original of Stagger Lee – a white man who served in the American Civil War. Room for a sequel?

Addendum (20 minutes later) I've just seen on The Beat that Stagger Lee has been nominated for an Eisner award for "Best reality-based work".
Posted by Steve Flanagan at 18:16