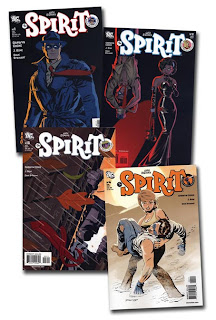 
If it wasn’t called The Spirit, I’d like it even more. 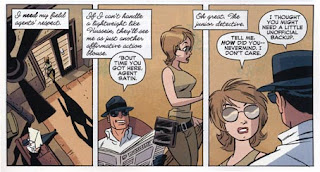 Qualms about Hussein Hussein apart, Darwyn Cooke’s revived version of The Spirit is an expertly crafted series of light adventure stories, mixing humour, thrills and quirky characterisation. Its writing is surefooted, amusing and well-paced, and its artwork serves the stories perfectly: technically competent, expressive and smoothly-flowing. More comics should be like this.

But The Spirit was a strange candidate for revival for any reason other than protecting a trademark. There is nothing compelling or striking about the lead character. As the script for Cooke’s first issue put it, he is “a big blue average”, brave, handsome, affable – but not very interesting. To be sure, well-adjusted heroes are a rarity in American comics, but there is nothing here to make an author declare, “I must make stories about this character”.

The same is true of the other elements of the strip. Central City is an undistinguished urban space. The supporting characters are colourful, but Cooke has chosen to change them significantly. P’Gell has lost her casual amorality to become a woman with a committed and tragic past; Silk Satin has lost her criminal background, family complications and British nationality to become a professional CIA agent. They might as well be new characters – well-drawn, entertaining characters, but in no need of those old names.

What was unique and compelling about The Spirit was not its component parts, but the way that Will Eisner used them. It may seem strange to emphasise the importance of Eisner personally, when The Spirit was the product of a whole studio. But look at how the strip read when Eisner was not paying attention – while he was away on military service in World War 2, or when he left the writing to Jules Feiffer and the art to Wallace Wood in 1952. It is almost a different series altogether. Even if he was just overseeing scripts and polishing art, Eisner’s influence completely dominated The Spirit in its heyday.

That heyday certainly saw a lot of light-hearted adventure stories in the Cooke mould. But it also emphasised two characteristics of Eisner’s work throughout his career: a compulsion to develop new techniques and to push the boundaries of his craft; and a fascination with the lives of ordinary men in the street, and how destiny, fate or chance can bring catastrophe to them. Both characteristics are on display in these opening pages of “The Fly”: 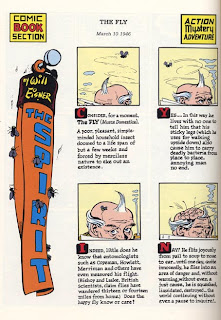 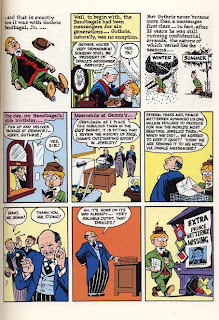 In contrast, Cooke has so far concentrated on his lead adventurers, with little room for bystanders. Furthermore, his strip reads like the work of a master craftsman working within the limits he has already staked out for himself.

The main piece of experimentation has been Cooke’s use of double-pages splashes. For the most part, these have not been successful: neither the images themselves nor their place in the story have justified their size. An exception is the splash for issue 4, which conveys something of the environment in which Satin and the Spirit have found themselves. 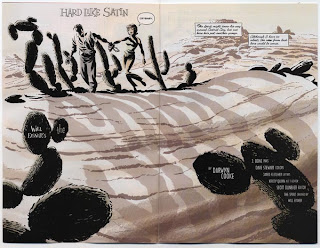 Otherwise, Cooke has confined himself to the odd little trick like this multiple image of Dolan from issue 1 … 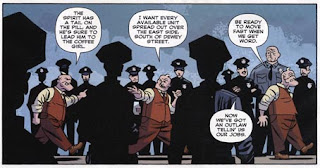 … or these flashback images from issue 2 … 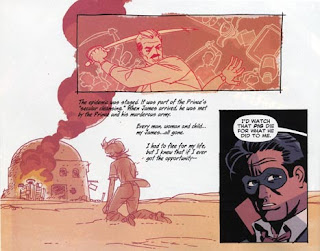 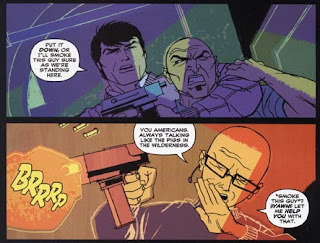 The issue 3 flashbacks are a good example of Cooke working within his comfort zone. The use of full page width panels and geometric colour blocks (derived from modernist advertising graphics of the 1950s and 1960s) serves to differentiate the flashback sequences from the present day scenes. But Cooke had already used both techniques in The New Frontier and his issue of Solo.

Still, it is perhaps better that Cooke makes The Spirit his own than that he should fall victim to the self-conscious pastiche that often results when comics creators try to be Eisnerish. Take this example from Alan Moore and Rick Veitch’s Greyshirt. 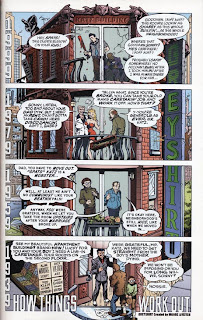 It is clever and effective, but also forced and arch.

There is, of course, one other big difference between Eisner’s Spirit and Cooke’s. In four months, Cooke has produced four 22-page stories. Over the same period, Eisner would have produced seventeen or eighteen 7-page stories, giving him much more scope to play with new ideas. Perhaps, as he gets into his stride, Cooke will start stretching his muscles. I certainly intend to hang around long enough to find out.

Panels from the issues under review, plus: